The Rise of the London Food Court.

“food court noun [ C ] uk /ˈfuːd ˌkɔːt/ us /ˈfuːd ˌkɔːrt/ a large area or room, for example inside a shopping centre, where there are small restaurants selling many different types of food that you can eat at tables in the middle of the area. Restaurants & cafes. “

Thanks Oxford English Dictionary. Just in case we weren’t sure.

If you Google “London food courts” you’ll get a pretty extensive, if slightly arbitrary list of places to eat, from street markets to Harrods Food Hall to individual restaurants. The term “Food Court” or “Food Hall” in London is yet to take ownership of its true meaning, as it has done in Singapore for instance, where the Hawker culture is well defined and actually emerged as a result of the street food traders being moved off the streets and into covered, repurposed spaces such as car parks, so as to keep the city looking neat & tidy.

Casual dining in a dedicated communal area is not a new thing in London, it has in those basic terms been present for as long as I can recall.

I launched my own street food brand, The Bell & Brisket, in the middle of Brent Cross shopping centre of all places. Their “ food court” area then consisted of Burger King, Pizza Hut and brands of that ilk. Yes it was a long time ago.

In hindsight Brent Cross may not have been the ideal starting point for a new street food business, but if nothing else it taught me to refine my offering and not to listen to the old ladies of North London who kept asking me if I sold muffins.

“You should sell muffins, the previous people sold a lot of muffins.”

Maybe not my ideal audience. I left after a couple of months.

But back then I was not looking for a food court environment, I wanted to be on the streets, visceral, against the elements and able to eye ball my customer at close range gauging the true response to my product, the good and the bad, standing shoulder to shoulder with fellow traders all vying to eyeball those same customers while we hung onto our gazebos in gale force winds. Those days were the rights of passage for street food traders. Most of who weren’t chefs with restaurant backgrounds, but ex city workers, or marketing managers who’d just had enough of the daily grind and found an unprejudiced opening into a new career.

At that time (2010) the then street food “revolution” was just a fledgling rare breed burger sizzling on the grill of hope, for what we could see was a definitive shift toward something new and fresh. Petra Barran was then heading up the Eat Street collective soon to morph into the King of the lunchtime, Kerb. Richard Johnson was championing traders via the British Street Food Awards, and Dom Cools-Lartigue was laying those anarchic fire pit foundations for the brilliant bad boy of street food, Streetfeast.

These were the halcyon days of street food where it visibly ceased to be a trend and allowed a new way of eating and a new way to earn a living to enter our psyche and cement itself firmly into the London food culture.

But where was it all leading to? Ok so we’ve got over that tricky hump of doubt from the sceptical British public. Yes we can serve restaurant quality food from a windy gazebo, and our hands have been sanitised and the food you are eating has full traceability and heritage. It’s just that you might have to queue in the rain for a little bit, and eat from disposable packaging while shoving your bottle of hand crafted soda in your pocket while you do so.

That is part of the fun right? It’s sociable, we all love a queue chat, and you feel great that you are supporting a really small business, right there on the front line. You get to know your favourite vendors, and their food becomes part of the fabric of your day.

But how would it be if you could add a few elements that might make the whole experience a little more comfy, a roof over your head, seating, maybe an actual knife & fork, while still holding onto the essence of street food that we all have grown to love. Enter the food court.

And we’re not talking those unloved alcoves in old 1960’s style shopping centres with moulded plastic seating and really bad burger chains that no one has ever heard of outside of those four walls. No. The London Food Court has stepped into gear and is presenting us with some plentiful and impressive options.

There has always been an attraction in repurposing existing properties to turn them into places to gather and eat. Streetfeast have always pioneered the revamp of old London warehouses and car parks, going for scale and gritty urban dynamics with their edgy renegade traders, slinging bbq and donuts against the beats of well amped DJs.

Then there’s the well loved use of the shipping container, the Lego of retail for concepts such as Boxpark and Pop Brixton. Both very different food courts in their own right, one more corporate, with the presence of larger brands and clean lines, the other a community inspired project, with the aim of boosting local businesses with a social “give back”. Each creating the court with these corrugated steel building blocks.

In defining the food court concept, it has to be the communal seating that is the key. All over the world you can eat in covered or indoor areas, Borough Market, La Boqueria, Valencia Central Market, all stunning places to eat, but if the outlet you want to eat at is full, then you eat elsewhere. The food court concept means you will always be able to eat from your preferred restaurant, although you may be sitting on the other side of the building at least you have the food you’ve been hankering after.

This new wave of food court is the sophisticate of casual dining. These places look sexy! Full of character, style and of course amazing smells. The recently launched Market Halls trilogy, now in Fulham and Victoria & soon to launch on Oxford St, demonstrates the repurposing of old clubs and station buildings and filling them with a mix of street food traders and known restaurants alike. Victoria for instance was once the old Pacha nightclub, with pieces of that history still engrained in the fabric of the building, now it is the best possible waiting room for Victoria Station. Here you can grab something to eat, while waiting for your train, as there are convenient departure boards on display.

Order your food, your buzzer goes off when it’s ready to collect, you sit with your fellow commuters and gastronomes alike, while drinking craft beer and eating short rib before catching your train.

Vast improvement on the limp tuna sandwich and packet of Golden Wonder of old. 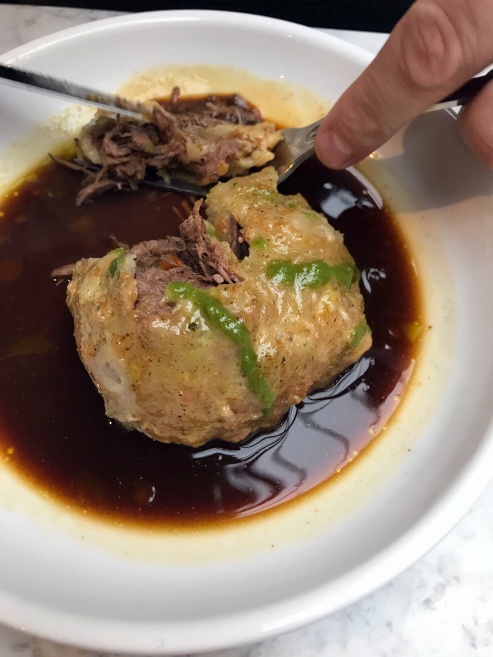 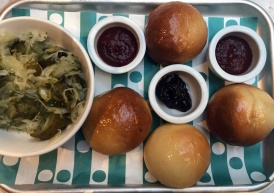 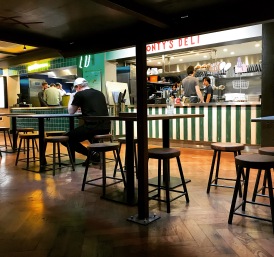 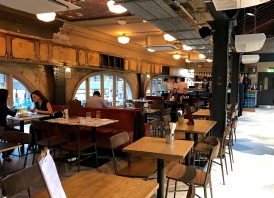 It’s worth mentioning Elephant & Castle’s Mercato Metropolitano at this point. I’m a big fan of this place as it has visibly grown over the last few years into a really solid food destination. They’ve put some work into it as it wasn’t an immediate hit. Tucked away off Newington Causeway in the shell of an old paper factory, and promoting community sustainability and artisanal producers, it’s a huge space to fill with consistently good food. But that it does, all with an underlying “Italianess” offering a large deli & produce shop where you can pick anything from cheese, wine and olives, a huge onsite brewery, wine bar and a huge selection of hot food traders. They are really tapping into their local Italian community, offering evening entertainment, cookery schools, city gardening, retail and street food. It’s fun, enterprising and unpretentious. 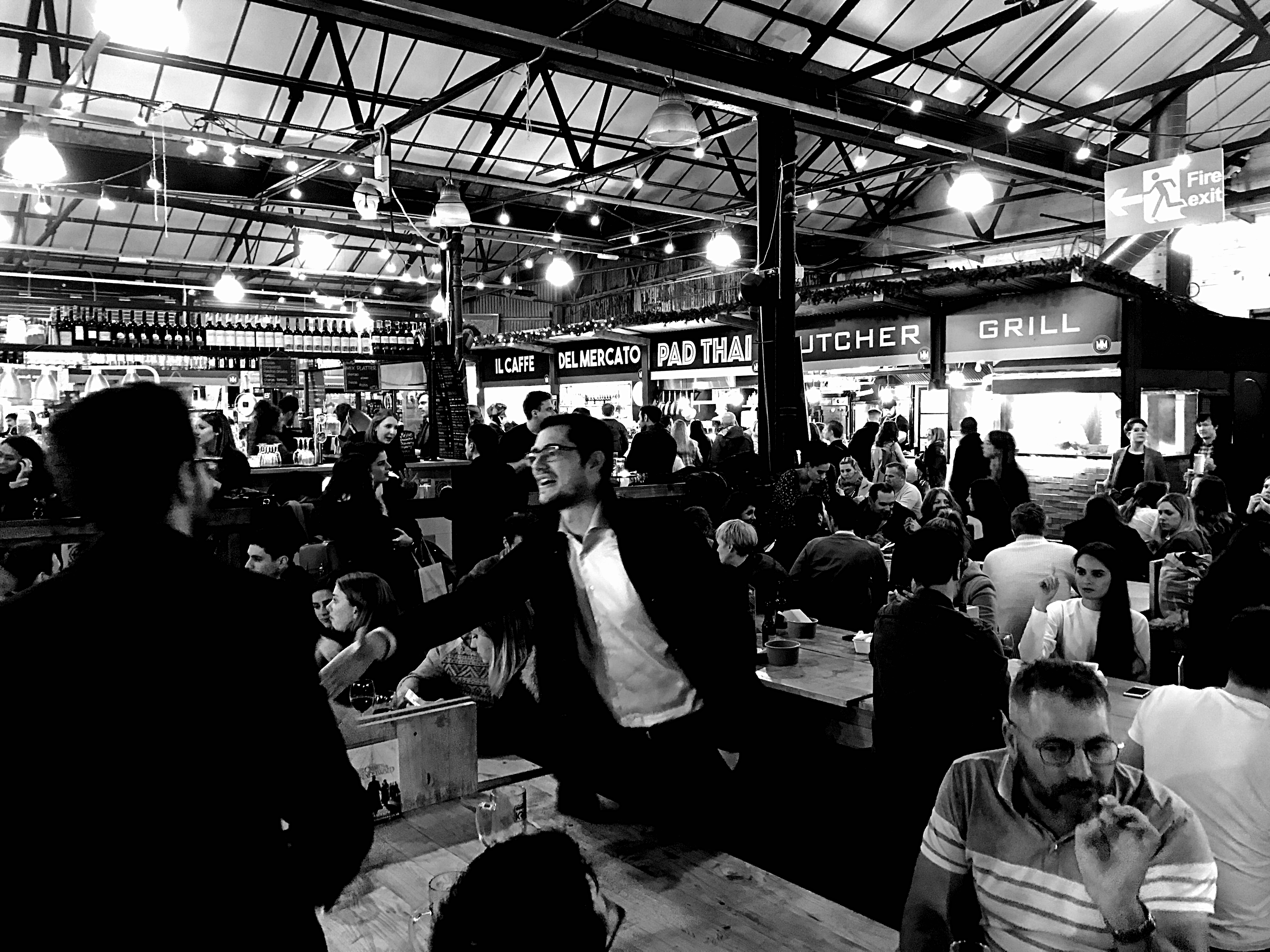 There are food courts popping up all over London now, with the big hitters paving the way. As Kerb, responsible for the transformation of London’s lunchtime markets, announce their first step off the streets and into “bricks & mortar” , with their take over of the old banana factory on Seven Dials, this is surely evidence of the street food progression from gazebo, to truck, to a spot in a food court?

And the big hitters really are getting involved. Not just in terms of the ownership but some big name chefs & restaurants are snapping up units.

When you see global businesses such as TimeOut launching food courts the size of aircraft hangers, their first opened in Lisbon in 2014, with plans for a London opening in 2020, these huge “canteens” are here to stay.

A great food destination is the sum of its parts. But how is it from the traders point of view? What’s the advantage for them to take a unit in these communal hangers, over settling into their own “bricks and mortar” restaurant? The rental costs per sq/ft are not that dissimilar to an independent restaurant site. Is it that they have the advantage of not needing any service staff as such, as the customer does their own fetching and carrying, and the venues provide the “Uncles & Aunties” who clear for you and all the other outlets? As well as all the maintenance and waste services that can really build up in restaurant site. So shared costs must be an appeal. And a shared attitude perhaps. There is something about being a part of a group, a space, a traders community gathered together under one umbrella that really creates a voice worth listening to. With the combined resources and a good operator, being part of the gang comes with all the perks of shared marketing campaigns, events and of course the holy grail, “footfall”.

There is that street food togetherness that breeds good spirit and that filters down to the customer. It’s much more fun to have the choice of restaurants under one roof, to try each other’s food, and work your way through all the traders in the building, rather than restrict your group to one restaurant with one type of cuisine. The lonely office lunch is a thing of the past.

Although when you look at the larger halls, you have to ask yourself, from a customers point of view is it possible to have too much choice under one roof? Are they going to send decision making ditherers into a frenzy of Aboulomania (new word just leant). I know I struggle in a local farmers market with its half a dozen stalls let alone the choice you get in TimeOut Lisbon with nearly 50 food traders all lined up ready to serve. It’s a hot bed of food envy and procrastination.

But thats a nice problem to have. Right?

I thought it might be an appropriate introduction to who we are by showing you a photo of our arses simultaneously hitting the water in a demonstration of elegance and diving finesse.